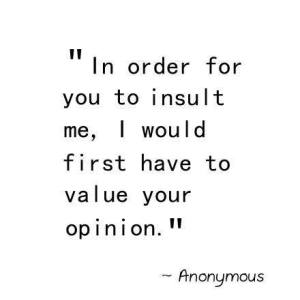 “This used to be my saying.”

My LA Spiritual Sister liked the quote and responded, “it’s still mine.” She still uses this quote today? I thought. “’I’m pretty sure I would still use the quote now. But I haven’t said it in a long time because I am surrounded by people whose opinions I value.”  When was the last time I used those words?

College was an odd time for me.  It took time to adjust to a new setting.  It didn’t help that I wanted to be in California at film school.  I was in Arizona thinking of ways to get to film school.  For the first time started to explore my ethnic identity, which for the first time made me feel like a minority.  So, I joined a Latina organization and other multicultural organizations. At first I felt at home because I surrounded by a group of people who understood me (or so I thought) and my culture. Over time, I saw how different I was and at times felt judged by those woman. I felt even like a minority of the minority. I was still surrounded by people whose energy didn’t match mine.

Those women were drama.

I used to laugh to myself as I saw or heard them talk about the drama that they allowed into their life.  Many times I’d roll my eyes in my mind or shake my head. I remember I’d tell people, when I asked for your opinion it is because I valued it.  I rarely asked for others opinions and I’d never asked those women for their opinion.

I never fully trusted them.  I never fully belonged with them.  I didn’t care to seek out their company.  Mix alcohol with women who are drama and you’ve got more drama.

My sister aka the doc student was getting her masters in education at the time.  One  of her mentors told her that each year she reflects on her year and thinks about the people in her life.  She let’s go of one friend who is holding up the values of friendship. I have since adopted her practice. Over time I let go of multiple friends at the end of each year.  And then I started walking away from friendships mid-year.  I even created a saying:

Friends should support you or leverage you forward, not hold you down, push you back or make you flat line.  If they do, you need to let them go or walk away.

There are people that are draining and addicted to drama. If you befriend them, they will drain you and bring drama into your life.

I have come to realize that life isn’t hard.  We make it hard.

My life has gotten a lot lighter as the result of letting go and I have so many more stories that I can write about on the topic.  This practice may sound harsh, but it is necessary for me to keep my energy for people who are worth my time and energy.

It’s been a long time since I’ve had to let go of friendships in this way.  I now allow friends to re-enter my life if they are mature and willing to be an equal in our friendships with both time and energy.

Recently a friend asked if he should keep his ex-girlfriend in his life who brings more heartache into his life then I happiness.  I told him did I tell you of my practice of letting people go?  He asked “you think I should let her go?” I said “let me tell you the saying and you can decide.”  He was delighted at the thought.  I said: “Friends should support you or leverage you forward, not hold you down, push you back or make you flat line.  If they do, you need to let them go.”